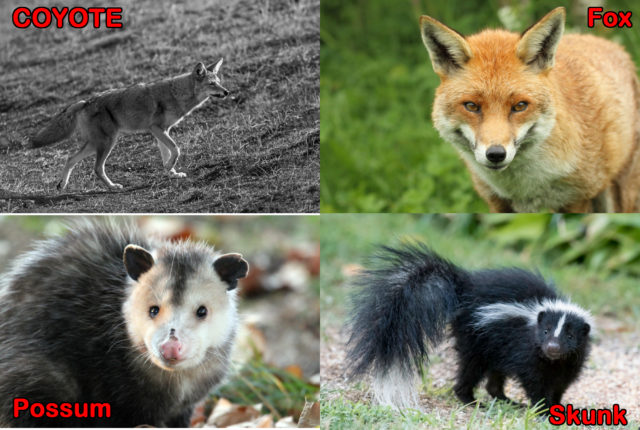 Keeping chicken is a very good thing to do, as a hobby or as a profession, but chickens are in comparison with other more dangerous animals they are small and vulnerable.

This makes them a perfect target for certain predators. My bet is because people from every corner of the world are keeping chickens and they are literally everywhere, there are predators that enjoy chicken meat everywhere. We want your chicken to be safe and that is why we at the typesofchicken.com team decided to share our opinion on the 8 most dangerous chicken predators:

The coyote is a common predator and it can survive in normal weather conditions and they are one of the most dangerous meat eaters in the world. Their biggest population is in North America and Mexico.

They enjoy chicken meat and attack furiously at coops and poultry farms.

They are very adaptive to the human environment and although they prefer to attack in the night they can attack during the day if they feel that it is safe.

You need to know that shooting them may not stop them so if are from one of these regions that the coyote has populated we suggest you buy traps at your local hunting market.

They are similar to some larger breeds of dogs so make sure you don’t shoot an innocent trapped big dog.

You might wonder why domestic cats are on this list but for most people, if they own chickens there is a chance that they are very animal-friendly and have a pet cat (Read More – Can Chickens Eat Cat Food?).

The size of the domestic cat makes her dangerous for your little chicks, but they are not a big threat to a larger adult chicken. Unlike dogs, it is the nature of a cat to hunt and that is why cats are dangerous for rabbits, parrots, and even some dogs.

An interesting fact about cats is that if they have the opportunity to hunt the chicks, they will kill more chicks and if it is your cat it may bring you some of them as a gift.

Depends on the type of skunk, they can attack your chickens but for most of them, if they enter your coop they will eat the eggs. As the coyote skunks are mostly found in North America.

I believe you are familiar with their natural defensive mechanism, they spray a very distinctive and unpleasant odor from their tails.

What you might not know is the most developed sense is hearing and they are very good diggers.

Another similarity with the coyotes is that skunks also attack in the night.

They are mostly attracted to food, water or any area they can adapt to as shelter, one of the easiest ways to prevent skunks from getting into your yard is to make sure you don’t leave any food outside during the night.

Hawks are maybe the most dangerous birds you can find, their claws and their beak are very strong and they are able to rip through the skin of almost every mammal.

What makes them very proficient hunters is that they are able to see from very long distances, and when they register some pray from a distance they have time to adapt and perform a strategic attack on it.

A smart and efficient way for you keep your chicken safe from hawks is to add a metal grid on top of your coop. You can recognize a hawk from the dark brown color of their feathers and the widespread of their wings.

Foxes are the most recognizable enemy of the chicken owners, they are quick, witty and adaptable, which makes them very efficient in their hunt.

They mostly attack in the night but do not be surprised to see a fox hunting in the day, especially during the springtime when they gather for their young ones. Except their natural hunting skills what makes the fox hard to catch is the way it resembles a dog.

From the color to the formation of its head the similarities with the dogs are obvious, but there is also one big difference between these two species and that is the tail. Foxes have a much bigger tail than the dog.

Raccoons are maybe the most intelligent of all the animals that are dangerous for your poultry. They are highly adaptable in a human environment and their size makes them very fast and proficient in their hunts.

Don’t let their size fool you, although small raccoons make up with their viciousness. Raccoons are known to mutilate their prey, or in this case the chickens. They will execute a fast surprise attack on your chickens and will try to remove the heads or legs of your chickens with their first bite.

After the domestic cats, snakes are the chicken predators that most adaptable to different habitats.

They usually have darker colors of the skin so in wet outside places they are very hard to notice, and for most of the types of snakes, their movements are very quiet and most likely not recognizable for someone that is not focusing on it.

Their main source of an attack is their venom, which they transfer to the body of their pray through biting.

Most of the snakes are dangerous for the eggs and the small chicks but some of them are bigger and can make a very big problem for you and your poultry.

Except covering your coop one way to get rid of snakes is to use snake deterrents and keep in mind snakes don’t like open spaces so mow the grass around your coop regularly.

Another predator distinctive to the North American region, possums are also dangerous for your chickens.

Although not as smart and wily as the raccoons, a possums strong suite is that they are a bit smaller and they can move faster and almost everywhere.

They will leave a mess after attacking a flock and most likely they will kill more than one chicken or chick. They are known to drink the blood of their pray and sometimes they leave the rest of the body behind – they attack viciously and fast.

Traps are a way to protect your chicken from possums, and to prevent possums you need to try not to leave any poultry food outside during the night.

15 thoughts on “8 Most Dangerous Chicken Predators. Be Aware of Number 2!!”