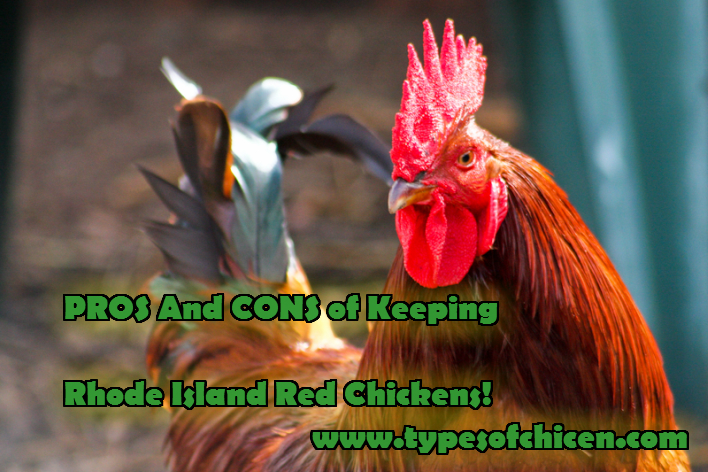 Rhode Island Red chickens are a breed that is loved by many…including me. I have 8 Rhode Island Red Chickens (love my Red Stars) and have had nothing but success with them. Their “look” is beautiful and entertaining.

If you’re looking for a great pet chicken to raise in your backyard, there’s no better option than the Rhode Island Red Chicken.

But you may be wondering why they’re so well-liked, especially over other breeds. That’s what I’m here to tell you.

The breed has since been accepted by the American Poultry Association and designated as Rhode Island’s official state bird. They are also one of the most common chicken breeds in North America.

As the story goes, a sea captain named William Tipp bought a “Malay rooster” from a fellow seaman and took it home. He bred it with his chickens and noted that the offspring laid more eggs than the regular flock.

Despite all the work put into breeding the perfect chicken, it’s another dude who gets credit for naming this breed: William Wilbur.

The Rhode Island Red is a beautiful bird, with a yellowish comb and red wattles. The tail feathers are black, which is perfectly normal for these birds.

The tail feathers are black, and the beak is yellowish/horn colored. The feet and legs should be yellow, and the eyes are orange in color.

Every chicken breed has its own pros and cons, and many chicken keepers want to know them. Because of that, we did a little research on their characteristics and this article might help you before buying your Rhode Island Red Rooster or Hen.

Firstly, we will go cover the positive side of Rhode Island Red chickens. Let us know in the comments below if your RIRs are similar to this behavior.

Rhode Island Red hens are known for their high egg production. They can lay anywhere from 280–300 eggs per year and will begin at around the age of 5 months. Their eggs are light brown in color, with a medium size and a thick shell.

What makes this breed of chickens famous for their egg production is that they can be good egg layers during the winter because of their layer of feathers and slightly different anatomy.

You need to treat them as any other chicken in the winter, but the chances are that the Rhode Island Hen Chickens will be the most productive.

If you feed your Rhode Island Hens in the way we suggested to you in the article what to feed your chickens to get the best eggs some time ago, we guarantee that you will be left without words about the quality of eggs this breed can provide.

Another thing that makes this breed of chickens special is that they are not only excellent egg layers, but their meat is also of very high quality.

The same layer of feathers that helps this breed of chickens be more productive during the winter is why their meat is of very high quality.

This makes their immune system more robust, and thus they are slightly healthier than many other breeds.

This is why many people compliment the meat that this breed provides.

It’s hard to know how to describe the personality of a Rhode Island Red chicken. It’s not like they’re particularly shy or aggressive, but they definitely aren’t quiet!

Rhode Island Reds are generally very outgoing, curious, and friendly. They love human company and will follow you around the yard, pecking at your feet if you don’t give them enough attention. They can be a bit pushy and raucous, but it’s all in good fun. I’ve found that my Rhode Island Reds are always very lovable – just not quiet!

Rhode Island red roosters can be aggressive, especially when they’re in a flock with other roosters. So if you’re looking to add one of these birds to your flock, make sure you choose the least aggressive of the bunch.

If you’ve ever had a Rhode Island Red hen, you know that they aren’t very broody—that is, they don’t sit on the nest and hatch eggs as some other breeds do. But when they do turn broody, they become very protective mothers!

Do Rhode Island Reds get along with other chickens?

It is possible for Rhode Island Red chickens to lay two eggs in one day, although it is not common. Most hens will lay one egg per day, although some may lay more or less frequently.

The amount of eggs a chicken lays can depend on a variety of factors, including age, breed, diet, and overall health. Some breeds, such as Leghorns, are known for being prolific egg-layers and may lay more eggs than other breeds.

Rhode Island Red chickens are also known for being good egg-layers and may lay more eggs than some other breeds. However, it is important to keep in mind that egg production can decline as chickens get older.

How hot is too hot for Rhode Island Red chickens?

It is generally recommended that Rhode Island Red chickens be kept in temperatures between 70°F and 75°F (21°C to 24°C) to ensure their comfort and health. However, these chickens can tolerate a wide range of temperatures and may be able to withstand higher temperatures for short periods of time.

If the temperature gets too hot for your Rhode Island Red chickens, it is important to take steps to help them stay cool.

Some options for keeping your chickens cool in hot weather include providing plenty of fresh water, giving them access to a shaded area, and using a fan to circulate the air in the coop.

How cold is too cold for Rhode Island Red chickens?

It is generally recommended that Rhode Island Red chickens be kept in temperatures above freezing (32°F or 0°C) to prevent frostbite and other cold-related injuries. However, these chickens are known to be hardy and can tolerate colder temperatures than some other breeds.

With proper shelter, Rhode Island Red chickens may be able to withstand temperatures as low as 20°F (-7°C) for short periods of time.

To keep your Rhode Island Red chickens warm in cold weather, it is important to provide them with a well-insulated and draft-free coop. The coop should have plenty of bedding material, such as straw or wood shavings, to help insulate the floor and provide a warm place for the chickens to roost. It is also a good idea to provide a heat source, such as a heat lamp or heater, for the chickens to use if necessary.

What is the lifespan of a Rhode Island Red hen?

This is where it gets a bit tricky. The Rhode Island Red Chickens are a proud breed of chickens, so they sometimes get moody.

They want your attention, and it is like they know that they are special.

If they are not satisfied with the way you are treating them, they will show you – they will turn aggressive towards you or start ignoring your presence.

This can affect your entire flock, so before deciding to breed the Rhode Island Red Chickens, make sure that you have the time to make them feel a bit special.

There are not many left of this breed; this makes them more expensive than other breeds.

Getting to this breed can be a problem for many backyard chicken enthusiasts. It will take some effort, but if you have the right sources, I am sure that you can find a good source for this breed.