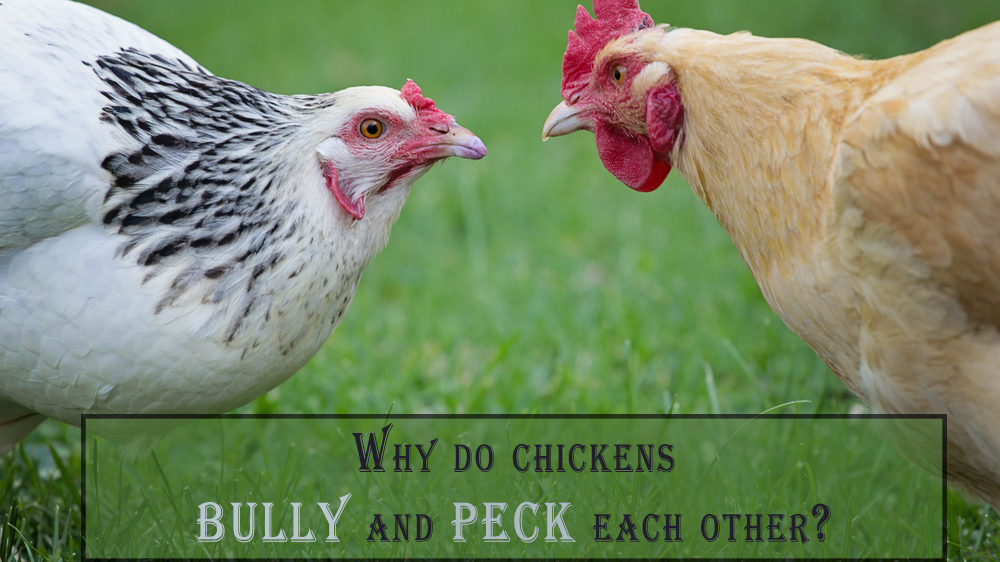 “As backyard flock owners, we are tasked with becoming chicken whisperers,” says Patrick Biggs, Ph.D., a flock nutritionist with Purina Animal Nutrition. “Keeping a peaceful flock requires us to interpret behaviors to decipher what our chickens are telling us.”

In the article below, you will understand why do chickens bully and peck each other?

First, you need to get yourself into this mindset: Chickens are not people. They are not even mammals. They are flock animals, and their behavior is governed by instincts.

Now, think of a flock of chickens. The term “pecking order” is very accurate. In any flock of mixed sexes, there are actually two pecking orders, the male one and the female one.

The alpha makes the rules and gives the orders.

The alpha will punish (peck, chase, attack) any chicken, male or female, that does not do as told.

The subordinate roosters are also in a pecking order, from the highest to the lowest, and if you have a bunch of roosters, especially young/small/new/injured/sick ones, the lowest roosters might even be lower than hens.

Hens also have a pecking order, from alpha hen to the lowest of the low. If you just have a couple of older roosters, the alpha hen is lower than all of them.

If you have juvenile males, the alpha and some of the more highly placed hens might be higher than those males until they grow up. This pecking order is also enforced by pecking/chasing/attacking.

If you have a few roosters and a lot of hens, here’s how it shakes out. The alpha rooster has a group of hens that are “his.” He will take care of his favored hens. If there are hens left over, the beta rooster gets his pick, down the line.

The alpha can mate with any hen he chooses, regardless of who she “belongs” to, and so on and so forth down the line.

The subordinate roosters will try to mate with any hen they can but will get punished by the roosters above him if he is caught.

Hens may try to resist roosters that aren’t their flock boss, but highly placed roosters will peck them and force them to mate even if they are not willing.

If you have a high rooster: hen ratio, then things can get really aggressive. A high ratio is anything above 1:8 or so.

If you have, for example, two roosters and 5 hens, then the alpha rooster will claim all the hens and will try to keep the subordinate rooster away entirely.

He will do this by pecking, feather pulling, chasing, attacking, etc. until the subordinate rooster stays on the outside of the flock.

The subordinate will try to sneak in and mate hens but will get pecked and chased if caught by the alpha roo.

You will have a complex pecking order even if you have no roosters. In an all-female flock, one hen will usually act like a rooster.

This alpha hen is often more aggressive in enforcing her will than a rooster would be, and does more pecking and chasing.

A good rooster will intervene if hens become too aggressive towards each other and break up the fight.

Chickens also enforce their places in the pecking order by pecking any subordinate chickens that get out of line.

Pecking order governs everything in a chicken’s life, from where it sleeps to what food it gets to eat. Chickens that are higher in the pecking order get the highest perches and the choicest morsels.

Lastly, flocks are very territorial. If new chickens come into the territory, they will be driven away. That’s why it’s important to introduce new chickens slowly.

After quarantine, keep new chickens separated by wire from the flock for a week or so, so they can get used to each other through wire before they’re actually together. Otherwise, current flock members may even kill new flock members, especially if the new members are much younger/smaller than the existing birds.