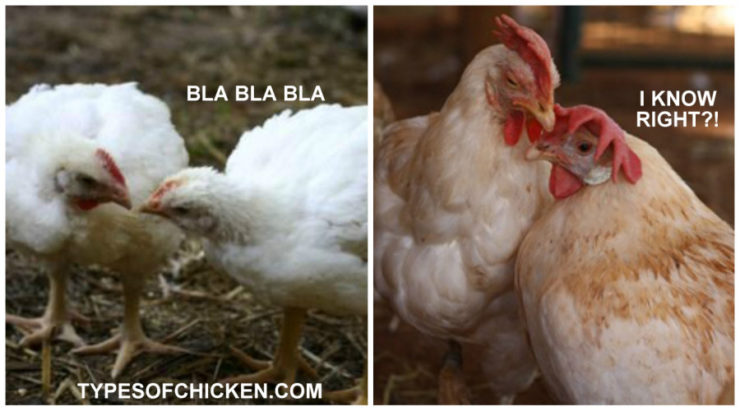 There are many scientific researches about the language of animals, how do they communicate and what can we do to understand them. It is no secret that most of the animals have a way of communicating with one another – everyone who has more than one dog in their neighborhood can tell you that. But did you know that chickens also have a way of communicating and that the way chickens communicate is one of the most complex ones in the animal kingdom. Until now we at the typesofchicken.com team have given you advice how to talk to your chickens now it is time for us to show you the way they talk to each other.

Chickens are very social animals – they can socialize with different animals and among themselves. When you see your flock at work and the hierarchy that resides in your flock you will understand that they must have a very complex way of communicating. Scientists have proven that there are more than 30 different sounds chicken make when they are communicating.

If you closely observe your flock you can notice that except from the sounds they make the chickens also express themselves through movement. And by combining movement and sound the chickens have created their own language. Once you realize this, watching your chicken play and run will be even more joyful than before.

From what I found through research what amazed me the most is what chickens communicate about, their subjects of conversation. These are the few proven things that your chicken can tell to the rest of the flock through movement and sound:
– If you are coming
-If they have found food
-If the food they found is better than the usual ( If the food they found is tastier than the food they usually eat they make more exciting sounds)
-If there is danger
-If the danger that resides is a fox or a hawk ( they don’t have specific sounds for the animals but what they do is they tell that the danger comes from above the ground or the ground) You need to know that not every chicken communicates the same way with the rest of the flock, and the more you let your chicken play together the more they will adapt with their way of communication. If you want your chickens to be happy and cooperative through communication you need to do some stuff to make them like each other and you. For example, when it is feeding time watch them eat and make sure they all get their part. Treat them all equally – I know that this sounds a bit dumb but trust me they know when they are being unwanted. In every flock there are some chickens that don`t want to pet and are kind of a loners, but you can get through to them with some attention. Make sure that every chicken in your flock has its share of food, water and run time and they will be an inseparable flock.

2 Comments on “The Language of Chickens & How do they talk to each other!”